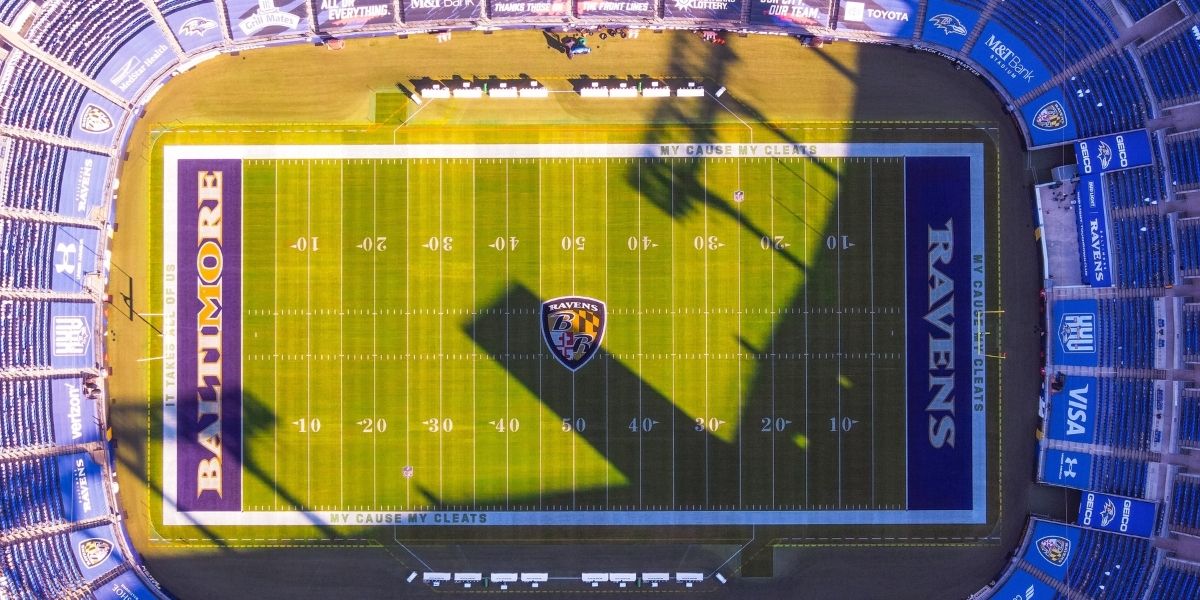 The Baltimore Ravens are one of the four contenders in the AFC North, along with Cleveland Browns, Pittsburgh Steelers, and the Cincinnati Bengals. Baltimore braces the NFL as a club member of the American Football Council.

The Ravens enable spectacular Sunday night football events for their fans, with memorable matches such as the one starring the Ravens vs Detroit Lions.

Now, let’s see what their betting lines and odds are, and what’s next on the Baltimore Ravens schedule.

For their overall odds, the Ravens have an average of +2000 for winning the Super Bowl almost every season. Their odds for the AFC are +700 on average, and for the AFC North, they are +120, with irrelevant fluctuations from season to season. Reaching the playoffs for the Ravens is set at -300 betting odds on average.

The Ravens’ odds may vary, which is understandable and losses such as the one against the Las Vegas Raiders when their star quarterback Derek Carr surprised them, are often the reason why.

However, even in such cases, sportsbooks have managed to prolong the odds variations with the win over Kansas City, for example.

When the Ravens come out victorious by a hair as was the case with the underdogs against Kansas City Chiefs, you shouldn’t expect a loss the next game.

There are several betting lines that punters can place their wagers on, after doing the necessary research on the Ravens.

Let’s start with a money line bet, which is as simple as it gets. Bettors should only predict the winner of an upcoming match and place their wagers. A money line bet on the Ravens, for example, is around -380, and since the minus sign denotes they are not the underdog, such a bet won’t result in a good payout.

Another one on the list of bets punters tend to place is the futures bet. Futures bets are exactly what the name suggests – you place your bet on the Ravens at the beginning of the season to win the North Division of the NFC, or even outright win the Super Bowl.

Prop bets are a bit more complicated, but then again, with the RB Gus Edwards and Sammy Watkins, their wide receiver, you can manage to snatch a winning bet.

Lastly, you can opt for live betting when the match against the Lions starts.

If you aren’t familiar with the Vegas odds system, don’t fret because you’ve surely encountered it through the course of your betting. But, if you haven’t, there’s not much to say because it still counts as the best working odds system there is.

You only need to know which sportsbooks offer the best welcome bonus or free bets for the Ravens, and we’ve got you covered. All of our operators are carefully selected based on their odds and incentives for new customers. So, whichever choice you decide to go for – there will be something extra to get.

Which Sportsbooks Have The Best Baltimore Ravens Odds?

The Ravens aren’t too shabby with their overall odds for winning the Super Bowl, so sportsbooks list the odds for them as something slightly above average. As we’ve dug through some sportsbooks, we’ve found out that the Draftkings Sportsbook and Sports Interaction currently offer the most competitive odds.

Sunday night, you’ll get the chance to wager your money on these sportsbooks, but if you’re inclined to examine other sportsbooks, do check out our whole list.

How To Bet On The Baltimore Ravens

It’s just as easy as counting one, two, three. Here’s how it should go:

Who Will Win The Baltimore Ravens Game Tonight?

Everything depends on the teams and the abilities they possess during a particular season. The Ravens would most likely mop the floor if they played against the Lions, for example, because they’re quite possibly the team with the least chance of winning the Super Bowl every year. With De Derek Wolfe on the defensive end, the chances of the Lions getting a touchdown would be slim.

Sadly, when the Ravens suffer numerous injuries in a season, such as the one with CB Jimmy Smith who received an ankle injury, they aren’t expected to perform at their best. Nonetheless, Marquise Brown, their wide receiver, is there to make up for those injuries and lead the Ravens into the upcoming wins.

Playing on home turf is unmatched because of the advantages it has. In the upcoming game, though, the Ravens will play as a guest and won’t have that advantage. Still, even if the Ravens won’t get their full support from their fans on home ground, the odds are in their favour against the Detroit Lions.

Below, you can check out their upcoming games.

Interest in some facts and trivia? Check out our list below.

Since 2008, John Harbaugh has been the head coach of the Ravens, which in 2019 was picked as the NFL coach of the year. In 2012, he brought home the second Super Bowl title for the Ravens.

The Ravens have just two previous coaches, which are:

Where to watch or stream Baltimore Ravens games online free?

Besides the standard TV Broadcasts of FOX, ESPN, CBS, you can watch them on Apple TV, Fire TV, Roku and if you’re on the go, the Ravens Mobile App will suffice.

Where to bet on Baltimore Ravens in Baltimore, Maryland

You’ll have the chance to wager on the team with Caesars Sportsbook since the Ravens have made a deal with them.

Where do the Baltimore Ravens play their home games?

Their home turf is at the M&T Bank Stadium in Baltimore, Maryland.

Have the Baltimore Ravens ever won the Super Bowl?

Yes, they’ve won it two times out of the two appearances they’ve made.

They play in the American Football Conference (AFC).

The Ravens play in the North division of the American Football Conference.

Matt Stover is the top scorer with 1,464 total points scored throughout his career.

Who has scored the most goals in a season for the Baltimore Ravens?

Again, it’s Matt Stover with the most points made during a season.

Who has played the most games for the Baltimore Ravens?

Terrell Suggs has played the most games for the Ravens.