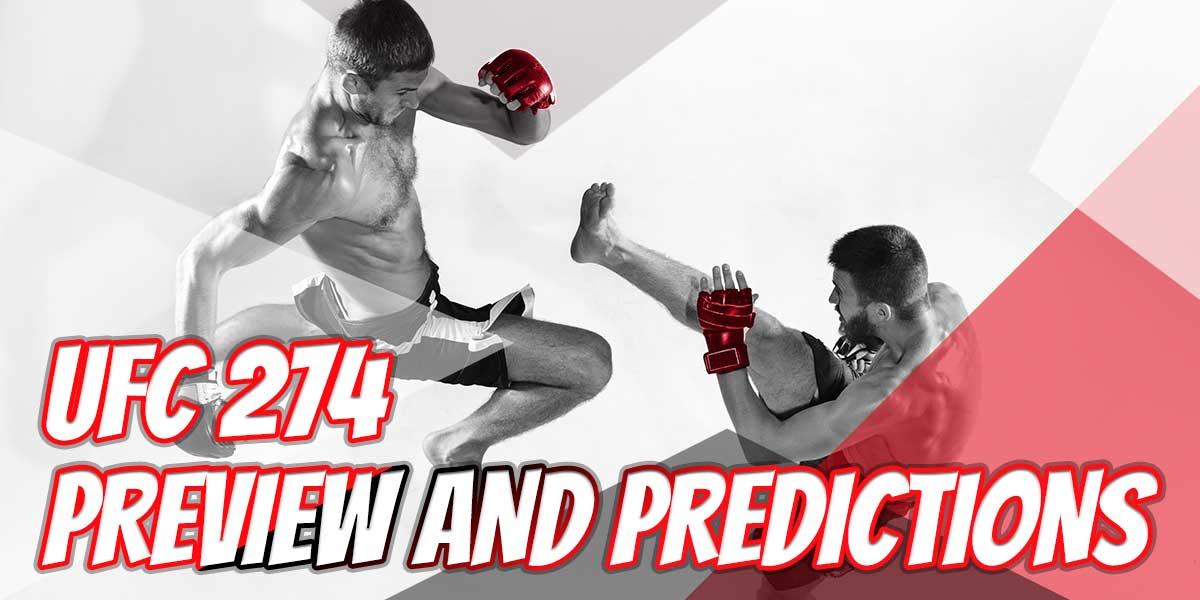 The next edition of UFC, UFC 274, is scheduled for May 7 in Phoenix, Arizona. The fight card features two title fights, ranked contender fights, a handful of rising prospects and possibly the last fights for two veterans in the MMA industry. In other words, this card is stacked with plenty of action.

Sports betting fans have 14 UFC fights available to bet on, and most Canadian sportsbooks have already opened UFC betting odds for UFC 274. UFC 274 promises to be a spectacle for all fans and sports bettors.

At UFC 274, Oliveira comes up against American Justin Gaethje. Justin Gaethje is a lethal fighter who is one of the most brutal punchers in the sport, evident by his stunning 18 stoppage wins. Combine Gaethje’s electric punches, his fast feet that result in damaging hits to the opponent’s legs and his insane durability; Oliveira vs Gaethje promises to be an even contest with plenty of action and drama.

The latest UFC betting odds at Canadian sportsbook Unibet price the champion Charles Oliveira at -140 favourite ($140 wager will return $100) and Justin Gaethje at +130 underdog ($100 wager will return $130). This fight can go either way, and both fighters have the opportunity to win.

The eagerly anticipated fight between these two dominant women in the UFC is a rematch from almost eight years ago. Back in 2014, Carla Esparza clinically beat Rose Namajunas in a third-round submission win. Namajunas has grown tremendously since 2014, and today has improved her skill set and is the current champion of the Women’s strawweight division. Both women have picked up impressive wins over a host of women in UFC, and a close, tough encounter is expected between Namajunas and Esparza.

The latest UFC betting odds at Canadian sportsbook Unibet price the champion Rose Namajunas at -145 favourite ($145 wager will return $100) and Carla Esparza at +140 underdog ($100 wager will return $140). This fight can go either way, and it would not be a complete shock should the strawweight title change hands at UFC 274.

Michael Chandler and Tony Ferguson are two of the most exciting and talented fighters in the lightweight division. However, both men have dropped considerably over the last two years, and both are on losing runs. Chandler has lost his previous two fights against Charles Oliveira and Justin Gaethje, both men who are headlining the same UFC 274 fight card. Tony Ferguson has struggled even more and has lost his last three fights. Both men will fight at UFC 274, and both are desperate for a win.

This fight has hallmarks of a ‘Fight of the Year’ contender, provided both men stay competitive throughout. Should the fight turn ugly, there is a high possibility of an early stoppage and plenty of bloodsheds. UFC fans and sports bettors will hope for the former rather than the latter.

Recommended Sportsbook to bet on UFC 274

Fighters that could surprise you in UFC 274

As mentioned earlier, Justin Gaethje and Carla Esparza are both underdogs in their respective title fights. However, they both have good chances to surprise their opponents and walk out of UFC 274 as champions.

Fan favourite Donald ‘Cowboy’ Cerrone fights Joe Lazoun in what could possibly be his final UFC fight of his long career. The 39-year-old Cerrone is on a run of five consecutive defeats, four by stoppage, but this is a winnable fight against Lazoun. There is a good chance that Donald Cerrone will provide one final surprise and leaves the UFC with a 37th and final victory.

The women’s flyweight fight between Tracy Cortez and Melissa Gatto is another fight that could surprise. Cortez is one of the most talked-about and hyped young prospects in the UFC women’s flyweight division. With a 9-1-0 record, Cortez has picked up impressive wins in her short career. Melissa Gatto is a dangerous Brazilian fighter who has extreme force. In her debut at UFC, she broke Victoria Leonardo’s arm and then had a stoppage win against Sijara Eubanks. Gatto can easily provide an upset and surprise at UFC 274 with a win over Cortez.

UFC betting is tricky, and caution is advised. A good strategy with UFC betting is single bets. Bettors who love parlays should use small stakes as the risk is higher. The UFC 274 fight card is stacked, and we believe there is value to be found with the underdogs.

Two of our bets are single, even stake bets on Justin Gaethje and Carla Esparza to win their title fights and walk out as champions.

Our Best Bet on the card is Michael Chandler to beat Tony Ferguson. However, there is not much value on a Chandler win, but we suggest bettors can take a Chandler win into their multiple bets and parlays.

At the time of writing, prop betting, and the method of victory markets are unavailable.

UFC 274 takes place on May 7 in Arizona. The fight card has 14 fights, including two title fights. UFC 274 is expected to be eventful with plenty of action and is headlined by the lightweight title fight between champion Charles Oliveira and Justin Gaethje.

Where can I find more Canadian Online Sportsbooks?

Canada has plenty of sportsbooks that offer sports betting. Canadian Gambler has a sportsbook directory for Canadian online sportsbooks.

Canadian Gambler has a sportsbook directory for online sportsbooks that provide odds on UFC 274.

Where can I find sportsbooks that allow me to bet on UFC 274?